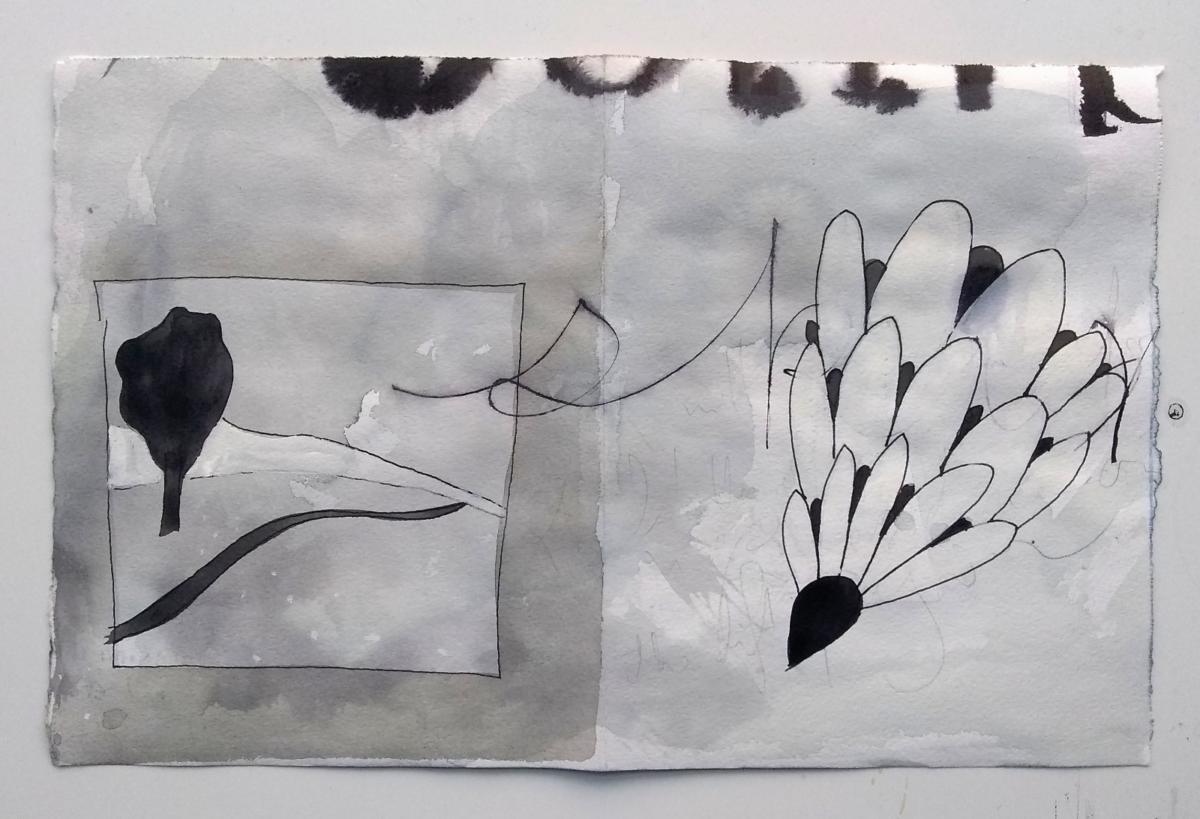 In my recent decision to take a break from seeing art as a commercial venture I’ve been excited to get back to making art for the sake of exploration. I asked myself, If art is to be just a hobby what do I want to do? The answer was quite clear. I want to make books! said in a tone that suggested some passionate cursing be added to the statement. I also noticed a yen to make more tactile and less literal work.

For years I’ve wanted to shift from being an artist who writes to being a writer who arts but having invested a lot in my art education and seeing a lifelong pattern of losing interest in things before I’ve explored their full potential I thought it might be wise to question the premise.

Now I have a decent paying job I enjoy, ample time to work on projects, and a great need to stop putting pressure on myself to be a “successful” creative person. What’s wrong with reorienting, making mistakes or possibly being a fool now and then…or even often? We can’t all be CEOs for heaven’s sake.

I prefer Maya Angelou’s definition of success anyway, Success is liking yourself, liking what you do, and liking how you do it. We can all become instantly successful the moment we read that quote if we have the courage to believe in ourselves.

Currently I’m making folios of little paintings from sketches on previously used watercolor paper. I have a pure blank sheet for one side of the folio and old designs to work with or paint over on the other side. The above slide show documents my efforts so far. I’m going to stitch these folios together but I didn’t create a sequential story with the text, they are just random experiments. 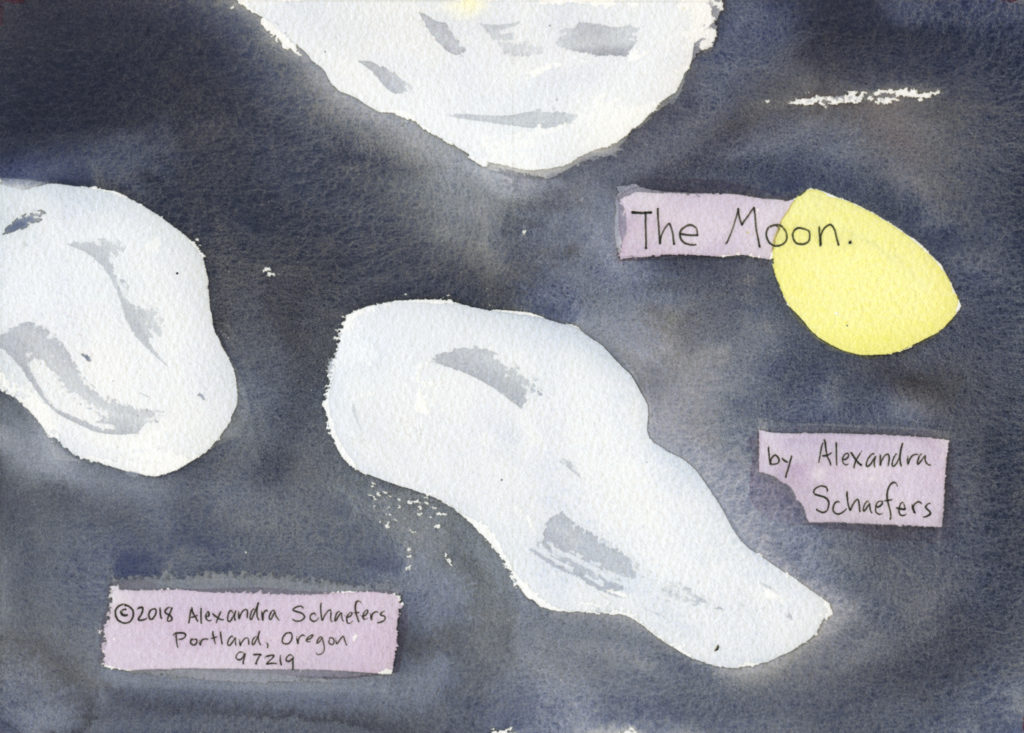 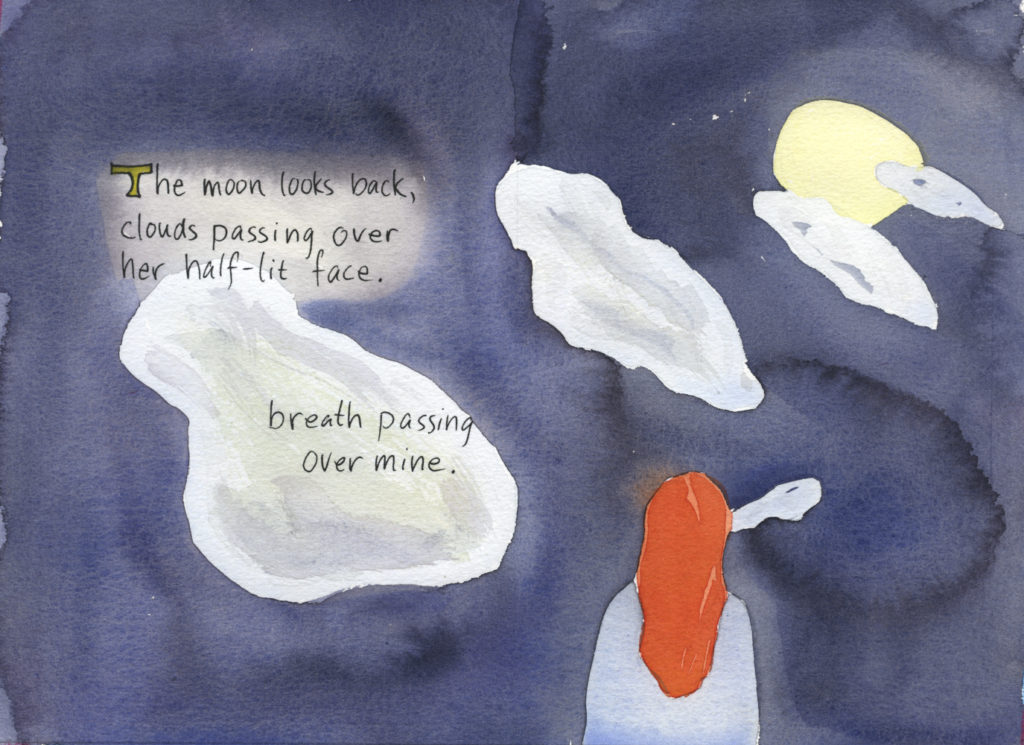 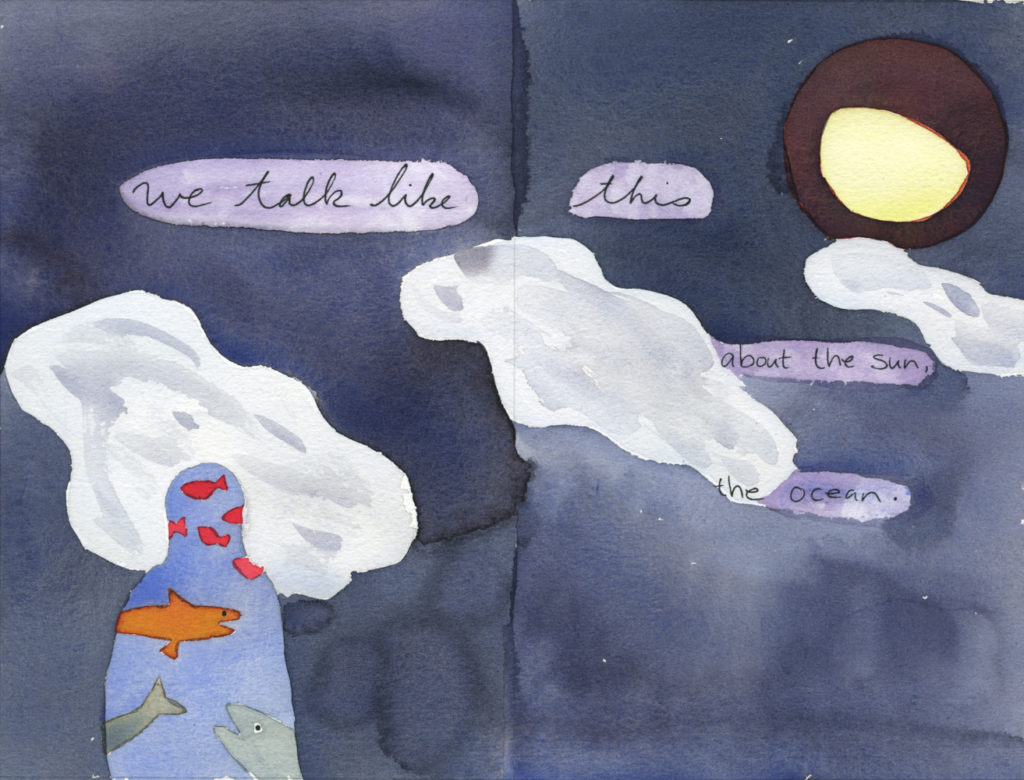 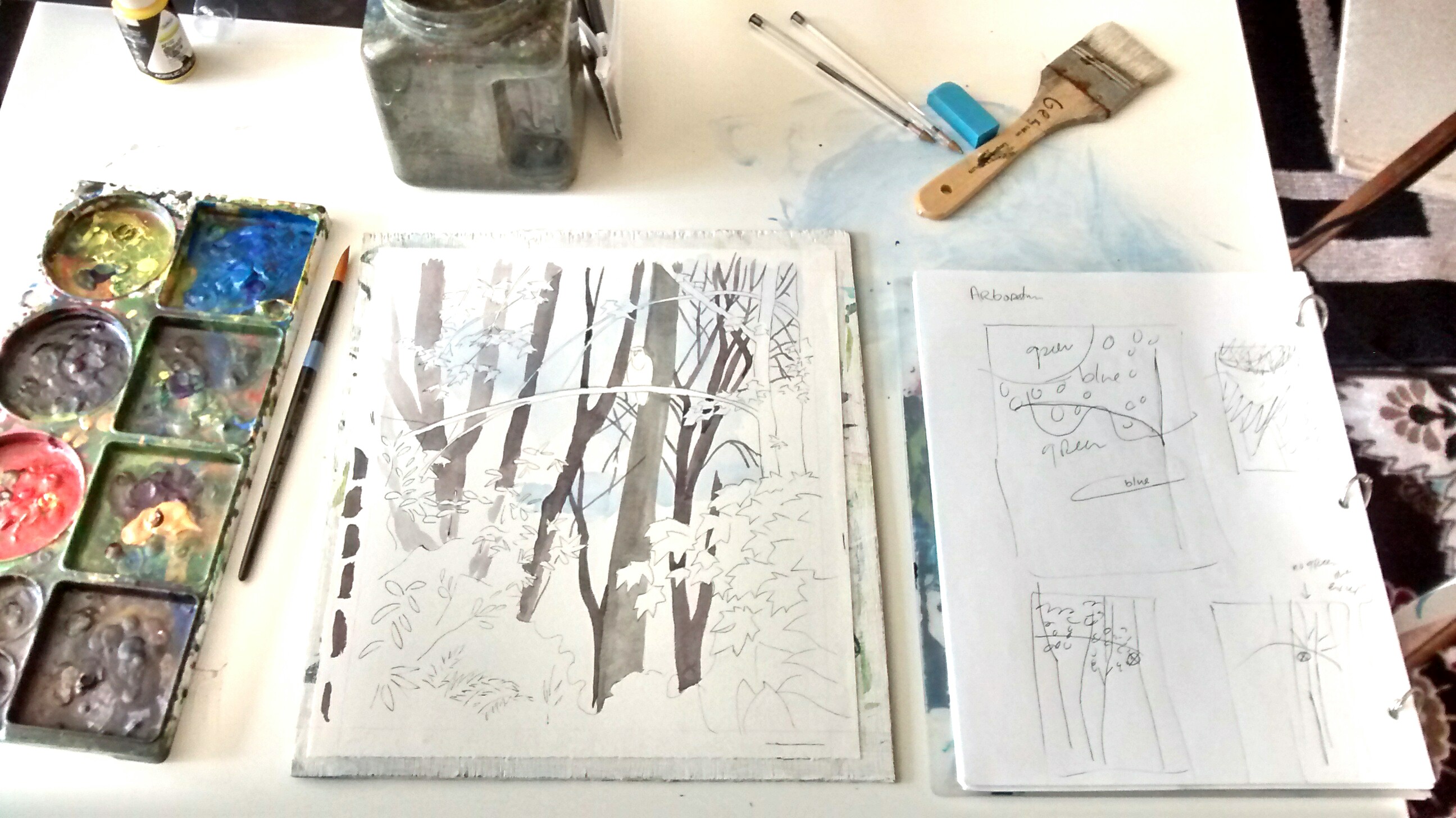 The other day I was perusing the internet when I read this beautiful quote by Courtney Martin on OnBeing’s Instagram, Make relationships that are reciprocal, not transactional. Makes lives that aren’t easy, but rife with good material. Make art that matters.

Inspired I looked up Martin and read a transcript from a commencement speech she made about the challenges of being an artist.

My goal has always been to eradicate negative feelings toward myself. It’s a fight that emboldens it’s own enemy and becomes quickly futile. But what if this these feelings are just part of the creative ecology? Not that all artists suffer internally, but that there is a required quota many of us have been assigned to. Or maybe an intense desire for honesty gets transformed into a plague of self-loathing for those that carry even a tiny seed of self-doubt.

It occurred to me to try a different approach. Instead of responding to self-loathing by dismantling my entire life and value system down to bare dirt and intently questioning each scrap of wood and nail as I build it back up, maybe I could just invite the self-loathing to tea as I’ve heard some Buddhists do, inspired by stories of Buddha inviting his own demons to tea as an honored guests.

Hello Self-loathing, it is hard to be an artist today, what would you like to talk about?

Perhaps I could have some influence if I take the time to make friends with this state of mind. Eventually I could level with it: I know you’d like to take this opportunity to scour every thought I’ve ever had to see if I am the real thing but I can assure you that it’s not possible to know and doesn’t matter. I am not strong enough to be something else, you are stuck being an artist and possibly a fraud. Is there something less existential you might enjoy doing today?

In the past I’ve benefited from a similar exercise I learned in one of Cheri Huber’s many books on mediation practice. When I became mired in melancholy I would sit down and write from the voices of the sorry feelings. It was quite amazing. Emotions that seemed overwhelming and debilitating would boil down to very simple issues once I let them rant for a while: You haven’t done anything social all week, do you hate me or what? That’s an easy fix once I see it clearly and then I feel like a human again.

Another example: I am really stressed out about that class I have to teach next week and I am dreading doing the prep.

It is easier to negotiate with a voice than a feeling: You’ve gotten a lot of feedback that would suggest you are good at teaching. But also, I don’t care if you bomb this class, I’ll still be here for you. Remember the last three times I avoided doing class prep but once I got started it was fun?

It’s still hard to get started but it’s easier after airing the discontent and worry. I also have more time to do the prep when I feel I can stop planning how to get a loan to build a tiny house in the field at my mom’s as any good failure would do.

I imagine many healthy people have these conversations in their heads automatically before they bog down without really being aware of it. Also, I’m not convinced this would help someone with clinical depression but it works well enough for me to suggest it.

There is a gift, I’m sure, in a propensity toward self-doubt. All of our challenges have the power to make us compassionate, to make us more resilient and capable. But most of all they are the terrain before us and we have a right to be intrigued with our path instead of worrying about how to get to the place we think we should be. 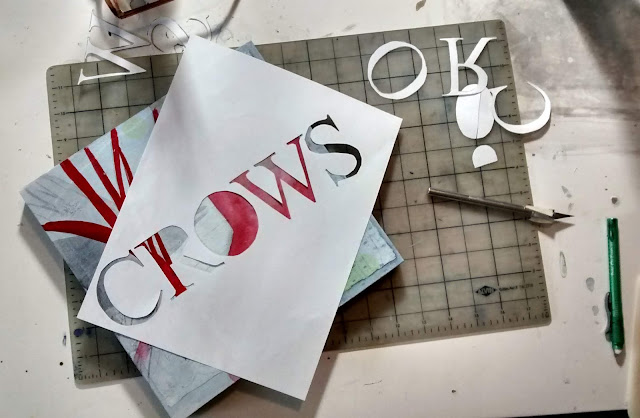 I’m getting started on a new body of work, Myths and Prayers in which I will be working intuitively and sensually from my experiences and observations in the landscape as a route to erase the distinction my culture makes between humans and nature.

One question I will explore is about how we relate to our current explanations of life, our myths, if you will. These are now based on methods instead of metaphor. This gives us a much more sophisticated understanding of the world which we have leveraged for incredible development but does it stunt some aspects of our humaness?

Since my goal is to work intuitively I can’t expect that my pieces are going to make any logical sense regarding this question but if I can blur the distinction within myself between humankind and nature I believe I will gain insight into the situation.

I’ll be working in layers on handmade paper, layers always inspire me to post lots of process shots. 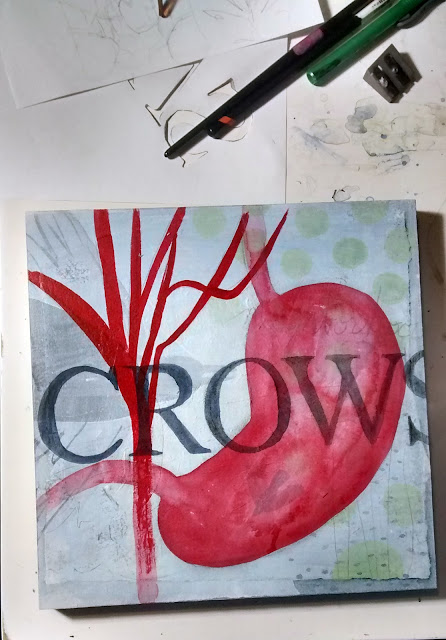 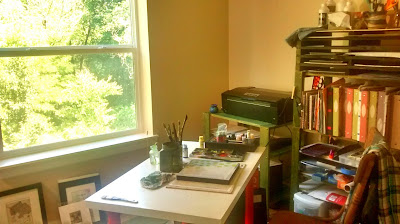 I moved a couple weeks ago, here’s my new studio, still getting organized!

I am pretty excited to be back in Portland, I have already been on a couple birding trips, a yoga class. There are just so many more options here it’s easy to make fun things work with my schedule. Tomorrow I am going to a tarot meet-up as I have finally reckoned with my mystical side. As someone who loves and appreciates science I felt a little squeamish about how drawn I am to tarot but there are a lot of people these days using it for personal growth instead of fortune telling.

What I like about the cards is the archetypes combined with art and chance. It creates an opportunity to see things from a new perspective and think different thoughts on an area of my life where I was stuck. Whether or not my spirit is drawn to particular cards based on a message it wants me to hear or if my own creativity simply makes a meaningful message out of the cards I happen to pick is a question I don’t feel like I need to answer. I’ve been reading for friends lately and they find benefit in the readings so I’m eager to learn more.

In the meantime here’s the first art journal pages in my new space. 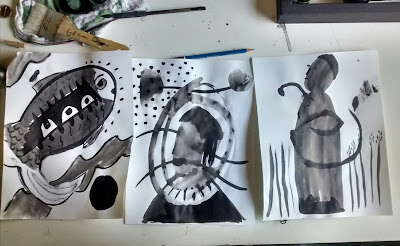 Yesterday I decided to work with photography, layering drawings and pictures together. I felt I was betraying my tactile-painter-self but I admit, it was enjoyable. Today I encountered the work of Francesca Woodman on-line. I’m assuming most of my artist friends are already acquainted with her work, her influence has clearly spread long and deep in the arts. It’s just like me to be oblivious to anything outside my own tiny sphere. I am totally enthralled with her work. It is hard in this age of visual overload to find work that grabs me so completely I can be riveted by an artist’s entire body of work and not just a few things that look good on Instagram.

What moved me the most was how she seemed to be defining femininity as as a thing vulnerable and soft but imbued with wily, mischievous strength and wrought with the same luminous decay that fuels nature. Delicate blossoms command the lives of bees for a brief moment then bruise and rot into the ground, a nurse log in the forest gives up its structure to feed new roots.

There is much debate as to whether Woodman was a feminist. I believe the feminism we see in her work is simply that she was a woman making the work she wanted to make. I don’t believe her work is about resisting the male gaze, it may give that impression at times but only because she was too busy making her art to be concerned with the issue at all. She works completely outside the idea of a male gaze and men who can’t fathom such independence assume she is merely resisting their gaze, classic.

Francesca was raised to be an artist, a whole person defined by her passion, she did not relinquish that.

For as remarkably tuned in to the beauty of decay as she seemed to be it is ironic that she cut her own life short in her youthful prime. I feel heartbroken we didn’t get to watch her work evolve, let it be another reminder that metal illness should be talked about and treated instead of shamed and hidden. 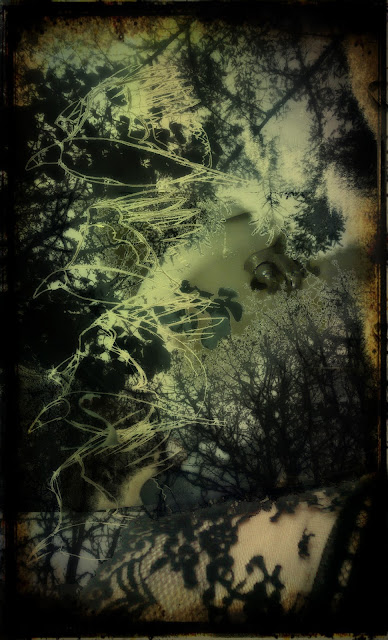 The other day I started experimenting with layering drawings on top of photography. The next day I encountered the work of Francesca Woodman which had a profound effect on me. I was mesmerized by her photos and heartbroken to learn she ended her life early at 22.
After work that day I made another photo and drawing experiment, this one influenced by Woodman though I wouldn’t expect that to be obvious to anyone. Her work is infused with decay which makes me think of vultures who have the same kind of sweetness about them that Woodman’s work has. Obviously that’s subjective. I’ll write another post about  my encounter with Woodman’s work.
I don’t think I’m creating anything terribly unique with the photos I’ve made but it inspires me to try out a different medium. 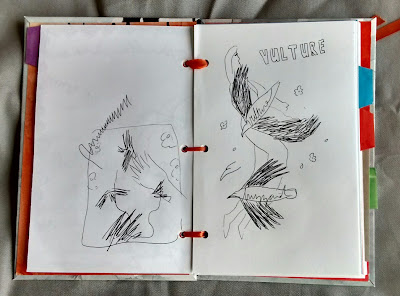 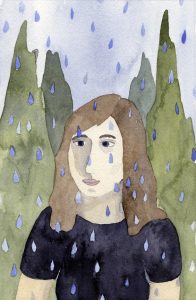